Using a virtulization platform is a common thing these days, unless you still build things on your grandma's machine.

Cloud computing is application of this feature to bring unlimited options, power, scalability and flexibility to your business.

But we use virtulization for developement too, a lot I say. Few big guns that makes their way in your environment are:

I have been using Virtual Box since last 3 years now, everyday and it is open source and totally awesome, you won't regret.

Hyper-V is already there as a component in your Windows 8 or 2012 machine. I gave it a shot for few months but was disappointed by the limited support for virtualizing non-windows systems. I won't say it sucks but I expected a lot more. Best choice for virtualizing windows machines though.

VMWare is the paid virtualization solution and every penny spent is worth the product. I had evaluated this option long back and finally decided to stick with it now.

Using a virtualization platform bring a lot of advantages, now I am glad my host machine (Windows 8.1 Pro) is always clean and does not become victim of my random dirty reseaches, learning or evaluations. But in sometime I realized that I started spending unnecessary time in preparing VMs for those nasty things. Plus, it would take me few minutes to hours before I can start my actually work.

Vagrant is the answer to those problems.

Thats what she said !!

It supports all the above three virtualization platform and download / installing / using vagrant is very simple thing.

you can literally get into action in two commands:

This will build-up and run a environment in minutes (only box download penalty for first time).

There is lot more to it beyond Init and Up. At time of this writing I am using Vagrant

Vagrant is a command-line utility on top of your virtualization to bring automation in workflow and actions.

So this would be the vagrant big picture (as I understand) once installed on your machine:

After you install Vagrant (with default options) you find a new directory in your system drive - C:/HashiCorp/Vagrant

This will be installed and can be used by "All Users" on the machine on which it is installed. During installation Vagrant installer will add the C:/HashiCorp/Vagrant/bin directory to your environment variable list. If not you can mannually add to your PATH variable.

Vagrant home is a per user directory used by Vagrant to manage that user's data and activities.

By default you can find this directory automatically created (mostly at the first run of Vagrant on command prompt) at: C:/Users/<your-username>/.vagrant.d/

One sub-directory is boxes that will contain extracted version of VM boxes (the templates, I say) that you will use to create your VM and developement environment.

Vagrant environment are your individual (one or more, independent) environments that will contain one or more VM your create from the above mentioned added VM boxes templates.

You can create as many environments you wish by executing following command:

Above command creates a new vagrant environment in the directory it is executed. This "Creating environment" is mostly creating a new Vagrant file in that directory that will be used by Vagrant to manage your environment.

The command will also create a .vagrant directory which will contain your machines as specified in the Vagrant file and other related files for this environment.

A typical empty vagrant file (when above command is executed) would look something like this:

You can provide [name] of the box to be used as base box (template) for your environment if desired and specify URL where the box can be found, this can be either a URL from where it can be downloaded or can be a file path (absolute or relative) where the .box file is stored. You can also specify box name that is hosted on VagrantCloud.

You can configure and manage your vagrant developement environment using this Vagrant file. Few of the options you can manage are hostname of a machine, memory size to use, number of cores to use, shared folder (or Synced folder), networks configurations etc. 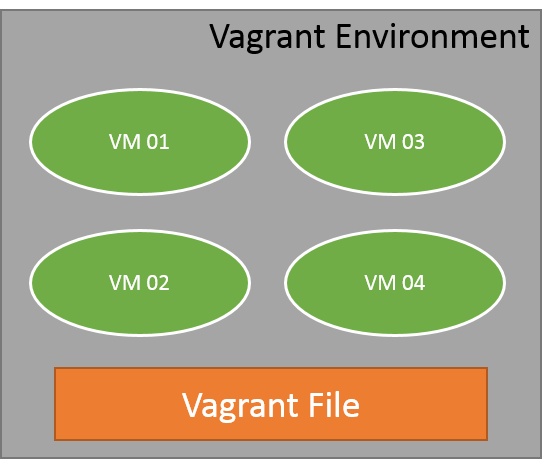 Here is an sample Vagrant file configuration which I can use to create two VM in a environment.

Here you can see we have define two vm named "hostone" and "hosttwo" inside those block you can configure the VM.

On firing vagrant up or vagrant up [machine-name] (which can be hostone or hosttwo in above case) you will get the environment machines up and running.

Output for my vagrant up based on above vagrant configuration